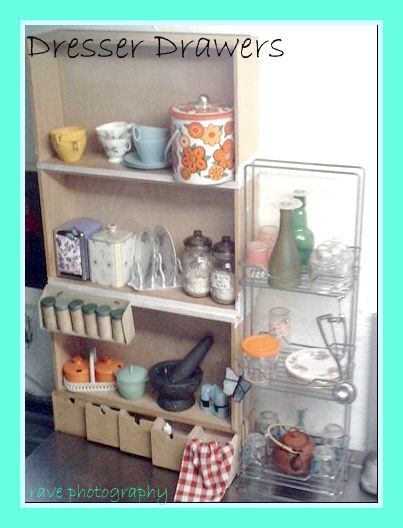 I believe that anyone that has worked as a cook and in kitchens as long as I have should just be given a kitchen for free by the government.Sadly this is not the case. All through the years we had “Las Maggies Restaurant,” my kitchen at home in the rented house consisted of broken cupboards installed in 1977.
It was only after we bought the house in 2003 and planned on re-selling it that we bought new cupboards. Fortunately the house didn’t sell. A few months later two of the cupboards fell right of the wall. I never put them back. But I did eventually find a use for them,after they had spent several years cluttering up the shed I have filled them full of soil and started a herb garden.
For a while i didn’t bother with cupboards on my kitchen wall,then one day I was on the way to the shed with some wooden drawers. Look what lovely wooden shelves the drawers make.

I am on the move

Before I cooked I wrote. Poems and stories filled up my head and spilled out…