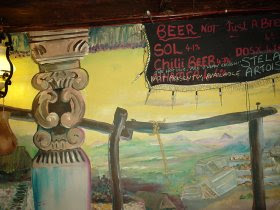 It’s hard to beleive it was 1993 when my sister Karen and I would rent movies on a Saturday afternoon and stand in my kitchen in Parkstone, making tamales to serve at Lost Maggies at dinnertime. For those of you who don’t know,Lost Maggies or, more formally, Las Margaritas was the Mexican cantina on Poole Quay that I spent ten years of my life running with Eric Bow and Pam Skuce.

Karen was a big fan of Tommy Lee Jones so for a while on Saturday afternoons it was tamales and Tommy- Lee. Tamales take some folding and tying but by the end of the afternoon we would have about sixty of them ready to be steamed for dinner. Then we would dress up for work. In those days it would often be funny dresses from the charity shops and weird hats because we were so overjoyed that we worked for ourselves and we could wear what we wanted.

Lost Maggies has been gone now for seven years. Recently, I have definitely been feeling the urge to have a Pop Up restaurant thingie in my living room. Why not? I ask myself, I have three sinks in the kitchen,a stainless steel table, a health and hygiene certificate, hundreds of vintage aprons and table-cloths. I love to cook.

My sister Karen is back in Canada but I have my lovely 13 year old daughter Raven and her best friend Ellie to serve tables. My husband Bruce Griffin has been roped in to to play the blues for us.

So here goes: December 4th there will be a Pop Up Mexican restaurant in my living room complete with live blues music. There will definitely be tamales and mole poblano and empanadas and maybe mancha mantel. Mmmmm. Three courses of lovley South American food with a slighlty eclectic touch.

Bring your own bottle or two – we will have room to keep it cool.

Suggested dontation will be £10- £12 per person,with tables of two,four and six available.

to book a table email me at 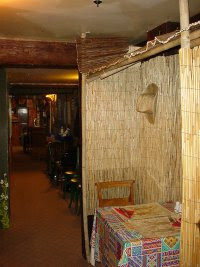 Popped up and Popped down I am feeding Blackbirds and Teenagers

Snow I love it! Someone is skiing down the middle of  my road. Most people…