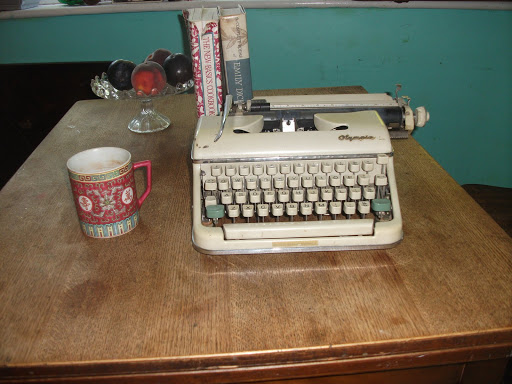 Before I cooked I wrote. Poems and stories filled up my head and spilled out into, notebooks, and filing cabinets.Cafes were only ever a place to write or a waitress job to pay for a place to live and my typewriter rental. In 1982 I lived in Toronto I waitressed at a cafe and I paid $25 dollars a month to rent a large Olivetti typewriter.

Cooking only used to be about writers block. In 1985 I worked in Breadspreads, a Toronto sandwich bar. I fell in love with the building next to the sandwich bar. It was an old building with wooden floors and a vintage elevator. Despite having an apartment a short subway ride away and despite not caring about the fact that it was an office building with no proper living facilities I rented a small studio in the building. I spent my nights there watching downtown Toronto being re-built. At night when I couldn’t write I opened up the sandwich bar and I cooked. I cooked for construction workers, Bike-Couriers and office workers. My food was just writers block half bitten stories. I made two soups a day and specials.
Sometimes on Seafood Chowder days the whole pot would be reserved and sold before it was even fully cooked. Once two customers fought over a whole strawberry rhubarb pie and tried to outbid each other.

While I was at Breadspreads an office Tower was being built across the road. I fell in love with the Tower it was sixty-eight storeys high.
Elevator engineers came from Switzerland and cooked in the tiny kitchen for their co-workers. An Iron worker who was also a First Nations person would go back up to the Reservation on the weekends and come back with bison for me to cook. Toronto’s Bike Couriers fueled up on my pasta and soups.
Food became more about stories and people and gatherings than writers block.

Then in 1993 Eric Bow and I opened Las Margaritas a Mexican Restaurant on Poole Quay we cooked, Tamales, Mole, Texan Chillies, Mancha Mantal. We fed tourists, the locals and our neighbors. Every year to Celebrate the Mexican Day of the Dead we closed the restaurant and invited regulars and friends for our Grande Fiesta’s. On Christmas Eve we took home our staff and our friends for Midnight supper. Las Maggies traded for ten years. In those years I had a baby girl, I took writing courses. I wrote and mothered and I cooked.

Now in 2011 I have found that after cooking in the basement at the glorious Cafe Boscanova for four years and now in the tiny little shack at the back of Camden that I am missing the stories and the writing and missing the people. Food has become about order sheets kitchen politics and profit. The only writing I ever do is menu’s and staff rota’s.

The writing and stories have been neglected so badly that I didn’t even notice nearly all my word documents had disappeared from my computer.Luckily my computer was backed up say they have all been returned. Stories will soon be appearing here as well as recipes .My notebooks through out my life have been filled with a jumble of recipes, stories and poems. It is about time my blog reflected who I am as well.

To read the Tower a peice of short  fiction about Toronto and cooking and food
http://tansystorytales.blogspot.com/

Old Cupboards In The garden And a Bath Full of Herbs

Almost a year ago I cooked for a 50th birthday party at Cafe Boscanova. The…

In the winter months, I spend a lot of my time making soup. Soup is…