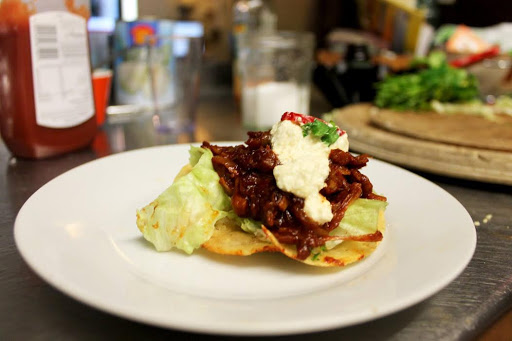 Toronto is where I first worked as a cook and where I got inspiration for multicultural and eclectic casual food. Luckily through social networking I still keep in touch with the Toronto food scene. This place came up on my twitter feed  last week  /http://porterhouseto.com/ It’s a new vegan pub in Toronto. The menu looks amazing.  What really caught my eye was a shredded jackfruit sandwich. Here is how it is sold at the Porterhouse.

I had never actually come across jack fruit. After a short browse on the Internet and on my bookshelf, I found lots of information on Jack Fruit. Apparently you can use it to make Reuben sandwiches, tuna melts, and pulled pork. Vegans and Veggies have known about it for years!

To use Jack-fruit as a meat substitute you need the unripe green fruit, not the ripened fruit.
You can buy whole jack fruit at ethnic shops at certain times of the year. Once ripe it supposedly smells quite strong. A few blogs gave instructions on how to remove the flesh- these included putting down newspaper and oiling your hands so you don’t get covered in the sticky sap. It seemed as complicated as operating on an alien species, so I was relieved to find that tinned jack fruit works just as well.

If you live in Poole or Bournemouth, Makkah on Ashley Rd Parkstone sells tinned green young jackfruit. Make sure you buy it in brine – at this stage it doesn’t smell strong at all.

My recipe for  BBQ Shredded Jackfruit

Drain the brine. There are a few bits in the flesh that are a little harder
(I think it’s  kind of like the core of a pineapple- get rid of those.)
There are also a few seeds they look almost like a baked bean .
(I took those out as well although from what I understand they are perfectly edible.)

Fry  two sliced onions in a 1 tbs of coconut oil – (you can use any oil but I like coconut oil – it has a slightly tropical taste.) Add the jackfruit, a big clove of crushed garlic and 2 tbs of smoked  paprika.
Add 200 ml of water and  simmer till it had reduced.

At this point I left it overnight in the fridge. It just happened that I wasn’t serving it until the next day. Leaving overnight is good because it infuses the  flavours into the flesh. Jack-fruit is like tofu; it hasn’t got a lot of flavour so its up to the cook to add it.

The next day, I made  BBQ sauce.You can use shop bought or your own favorite homemade BBQ sauce. To serve,mix the sauce into the jack fruit and heat under the grill until its hot and the BBQ sauce has browned the flesh a little. 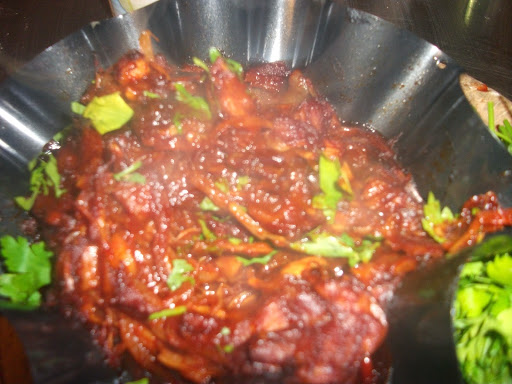 Use the shredded jack fruit for Enchilada, Tostadas, or serve it on a bun with a side of  sweet potato fries.
I served mine on gluten free tostadas with tofu garlic-cream and black beans.

This recipe uses Inuina Thai Taste Curry paste available from Waitrose for £2.16. Unlike a…

Yesterday I went out by myself for Lunch. It was my day off. I chose…

I like my kitchen to be created from all kinds of recycled treasures. Look at…